A team of volunteers has come forward to donate an entire bouldering wall for the First Climbing School in Iraq project!
International coordination for this part of the project was made possible by DHI Telecom and their support with the Sapphire 2 device.

A couple weeks ago I woke up to an interesting message on Facebook Messenger:

I stared at it for a moment as my eyes adjusted to the brightness of the screen, not sure what to make of it. For our project to establish the First Climbing School in Iraq, we are fundraising to construct a 9 meter / 30 foot tall climbing. In the beginning, we considered a bouldering wall, but ultimately decided on the full sized wall because this project was to set the standard for climbing instruction. So, I reached out to Kamaran, my contact for the team Destey Lutka, and he filled me in on the details.

A team of volunteers had assembled in New Mexico that had close connections with the founders of the Family Center Rapareen that is to be the location for the school (watch the 360 video here!). This next part is unbelievable, so buckle up. I learned that they had fund raised for the construction and will be flying to Iraq to construct a bouldering wall – this in addition to our effort to construct the full sized wall! What! Yes! Above is the first sketch of the plans I received.

These guys were definitely serious, but I had never constructed a climbing wall before and anything we build has be up to the strictest standards because of what this project means for climbing in the country. In addition, time was short as their trip was planned at the end of October. So, I immediately shared the exciting news with the incredible individuals who advised me on the large wall; experts from various parts of the world that had built climbing walls for competitions, gyms, and private clients. They immediately made themselves available, and I also scheduled a call with the volunteer team and Iraq – but ran into a snag.

The issue was that I was in the remote mountains of Poland with questionable to no internet, the volunteer team was in the United States, our team was in Iraq, and the experts were scattered around various additional countries. I would normally be panicked or planning to drive to the closest town or city with an internet cafe. However, as serendipity would have it, and I know that this sounds like something out of a movie, that same week I was speaking with DHI Telecom who offered to support me with their Sapphire 2 device. The Sapphire 2 is a cell-phone sized wireless modem that works on cellular signal and creates a hotspot with up to 4G LTE internet… and it works in over 130 countries in the world including remote Poland! I couldn’t believe that just when I needed to have video conferencing, this sponsorship happened at precisely the same time! Definitely check these guys out, they absolutely saved the day!

So, the plans I received were a perfect place to start but needed some modifications. I did not have much information beyond the sketch, so I saw the plans as a set of Lego™ blocks that I could simply rearrange. The first thing that we changed was the “roof” or ceiling on the left side because it sloped all the way to the ground and created a couple problems. First, in the area where the roof was less than 0.5 m off the ground, anyone climbing it would pretty much be lying on their back. Second, any stray materials the wind was blowing around, or garbage, would most likely get jammed in there. The second place we could improve was the shape. The wall could be “opened up” to create way more climbing surface. These were the main design improvements, but I also got advice on structural support, materials, and smaller details. This got me to the next step and I scheduled the call with the teams. 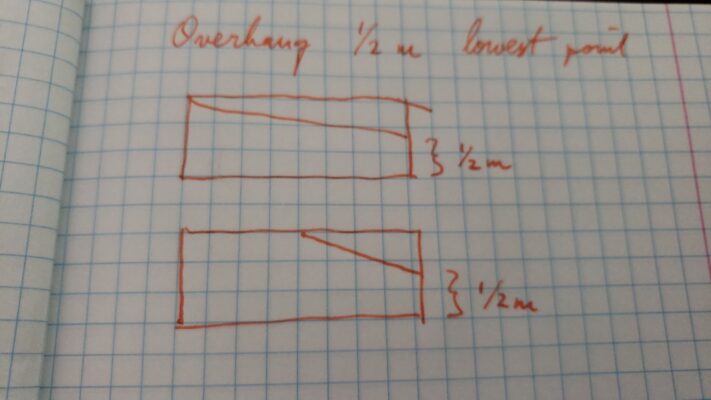 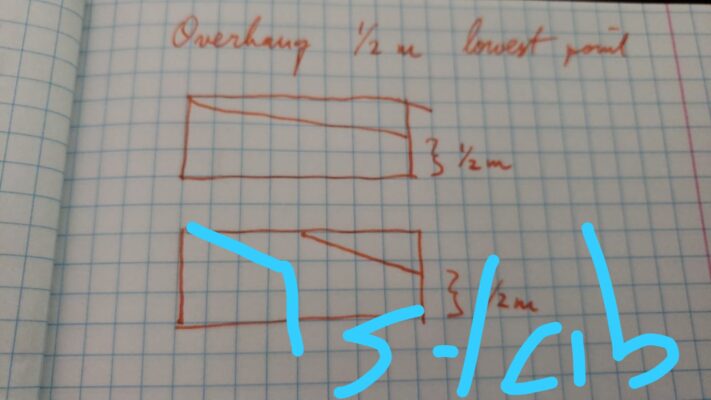 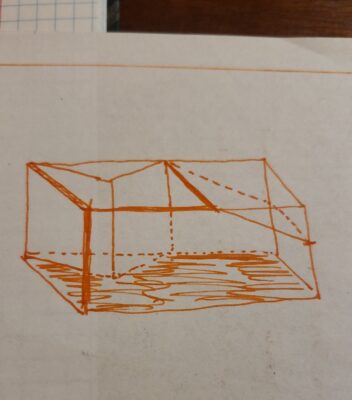 First, we had to discuss how to arrange the walls now that two were being constructed. For this, we considered where the sun would be shining from because temperatures reach the hot extremes in the Middle East. Second, we considered alignment with the larger wall and access. Specifically, we needed to make sure anyone belaying on the big wall would have enough room with the smaller wall behind them. In addition, we found that any children waiting would have a place to sit in the shade of the Family Center, and watch climbers on both walls. Third, we considered visibility both for any crowd that could form and also any pedestrians or people passing by in cars. We wanted to make sure that people would see the climbing walls so they could pique their curiosity. Second, we talked about the final design of the bouldering wall and whether we would have enough materials for it. here’s the second round for the design and anticipated materials: 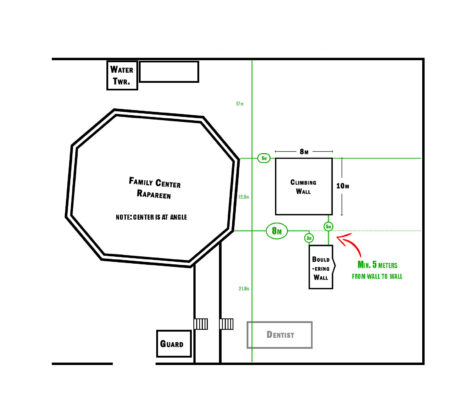 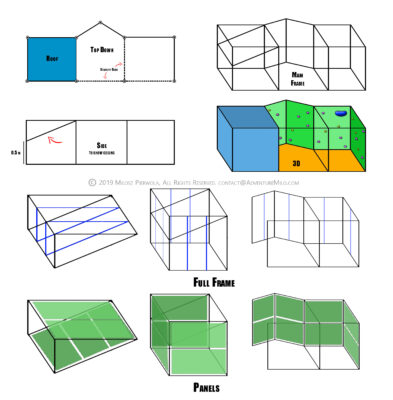 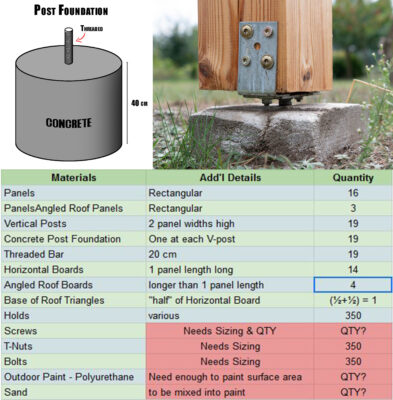 Perfect! Now, it was time to share with the climbing community to get their advice on the wall. I jumped on Reddit’s Climbing subreddit and on Facebook in several groups with the most helpful being the Home Climbing Wall Forum. Right away people were stoked to see the plans and offered their experience. One glaring issue was the appropriate depth of our foundation. Initially, we expected 40 cm to be deep enough for the concrete underneath the load bearing posts. However, due to the quality of the ground; dirt and grass that turned to mud with any moisture, there was a lot of concern for stability. After several well drafted pieces of advice, we committed to finding a local expert on construction to help advise us on the appropriate depth. A second issue was internal stability of the large panels – these could flex under weight. The solution was small triangles at the corners where the foundation posts met with the base and top beams.

Aaaaand, after about 5 days, I couldn’t believe that we had pretty much finalized plans for a realistic and basic bouldering wall that could be constructed with materials sourced locally. The only missing pieces would be the holds and t-nuts. However, the team had already begun making purchases and would be flying over with enough holds for the entire bouldering wall. This is an incredible blessing and we are all extremely grateful.

Unfortunately, the trip was delayed on account of circumstances out of our control, but we have already scheduled for March.

All of these incredible goals and achievements are possible thank to the incredible donors and volunteers who have contributed to the program. Please consider making a donation, and visit our project page to learn all about this incredible initiative.