Last month I traveled to Iraq for the first time in my life to meet the incredible people with whom I am establishing the first climbing and outdoor education school in the country. Returning from the trip on the red eye, having spent every ounce of strength making every minute count, I remembered a promise I made to a German friend. By this time I had basically lost function of the brain cells that stored the information, but he had already arrived at my village. This is where it is relevant to mention that we both discovered a newfound appreciation of the Slovakian energy drink Hell… 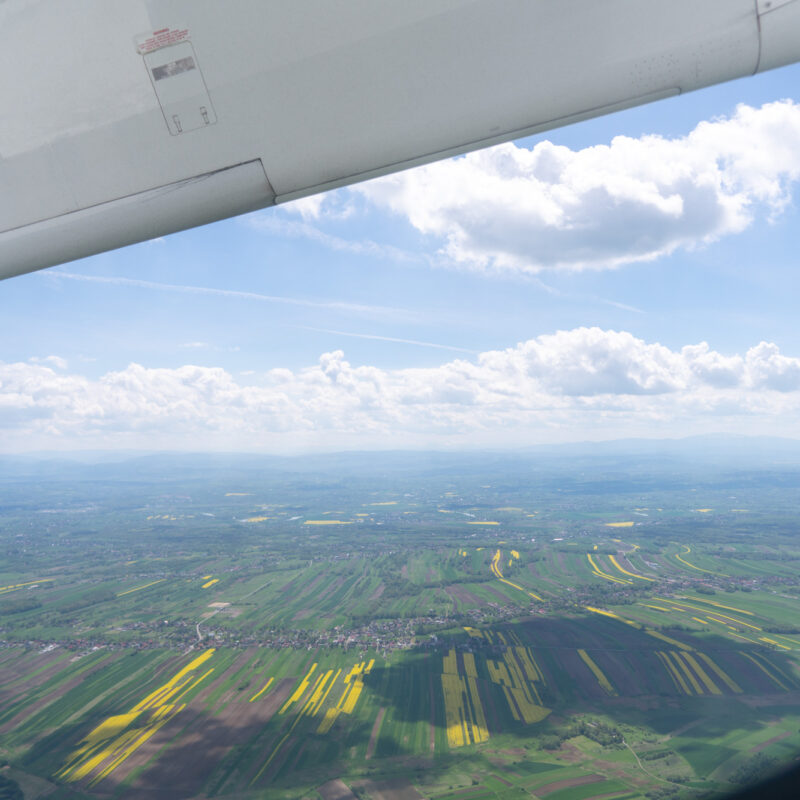 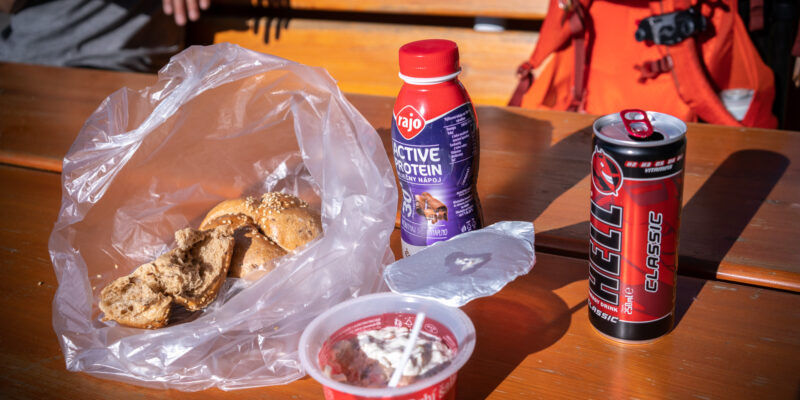 Flying into Krakow, I jumped in my car and had just enough time to stop at a gas station to get some calories before meeting Sven of the Instagram account @YavenBerlin. Sven had driven all the way from Berlin to hang out and I don’t have it in me to disappoint anyone. Racing in to meet him, we high fived next to the dam under the castle, and dropped my car off to take his totally sick off-roading/road tripping jeep into Slovakia to get that all natural high on the summits of the mighty Tatra Mountains. 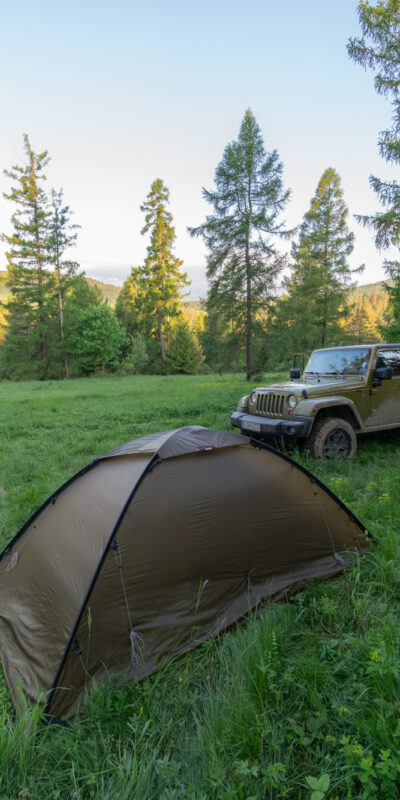 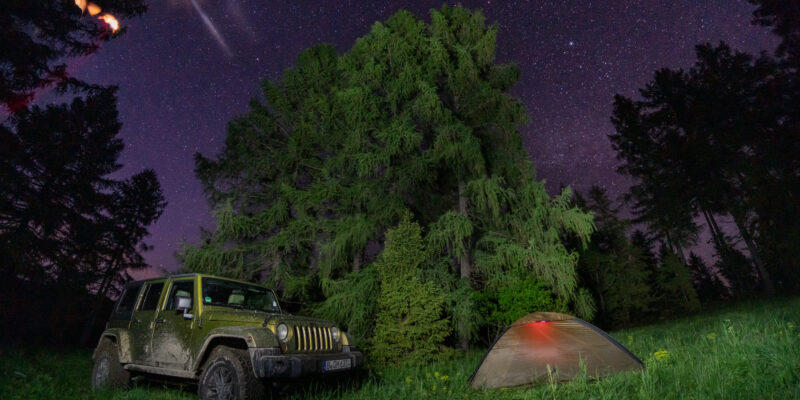 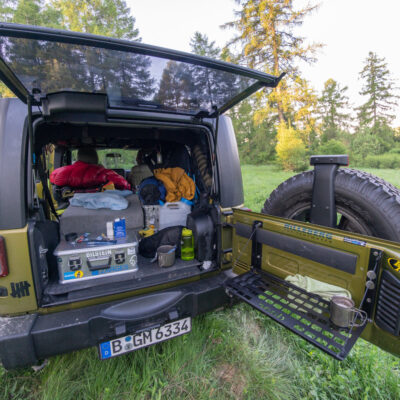 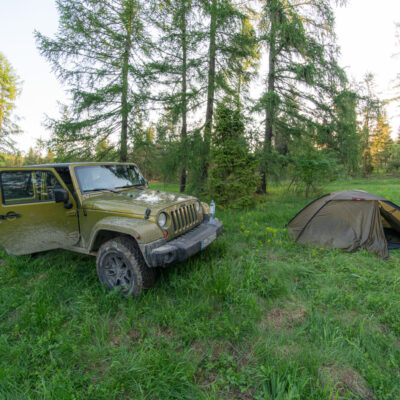 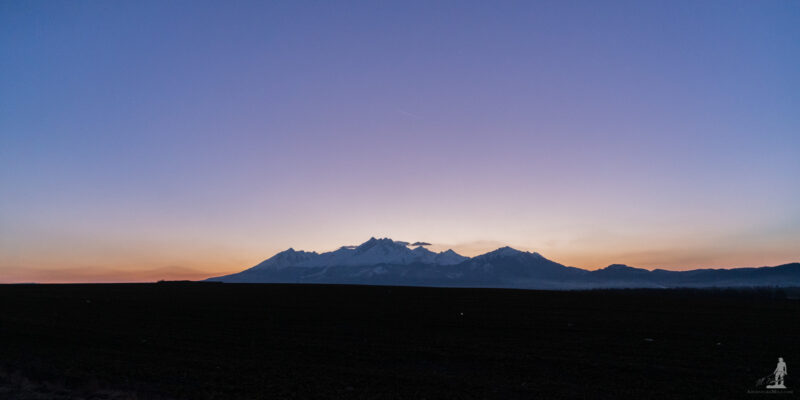 It already being late in the day, we drove up to the foot of the Tatras so I could show him the spectacular light-show sunset. Unfortunately, you are not allowed to camp in the park. So, we turned around and drove back to a spot I had permission (talk to locals – oh my, this cannot be emphasized), and I don’t even remember my head hitting the pillow. Then, in the morning, we admired the incredible spot that was only illuminated by our headlamps the night before and took off to the rock. 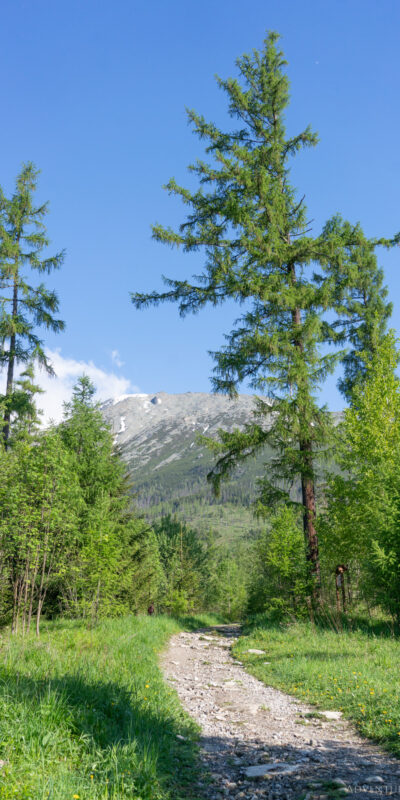 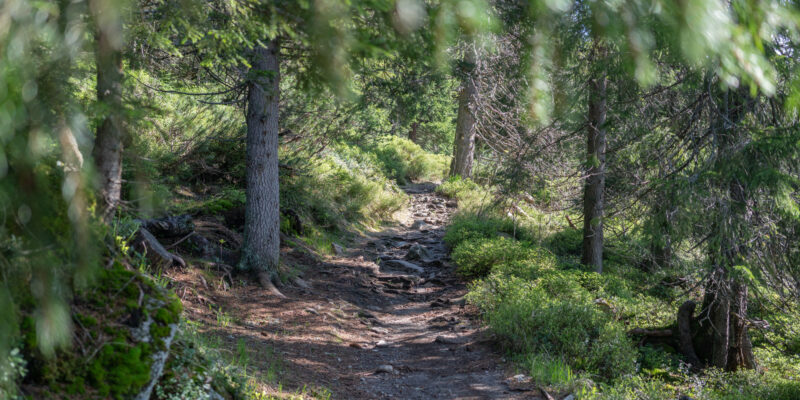 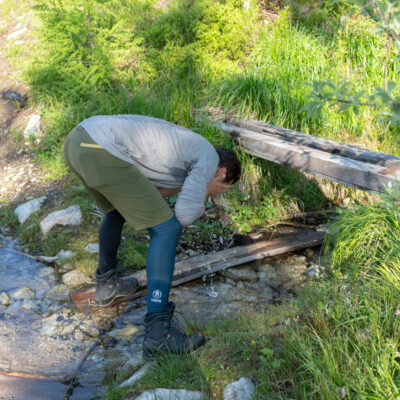 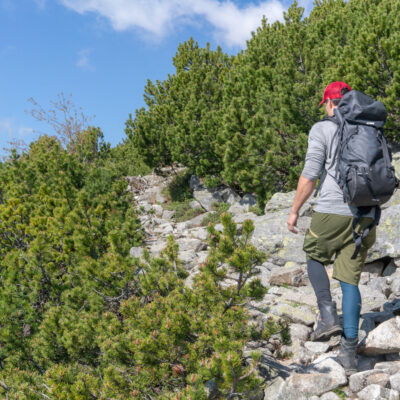 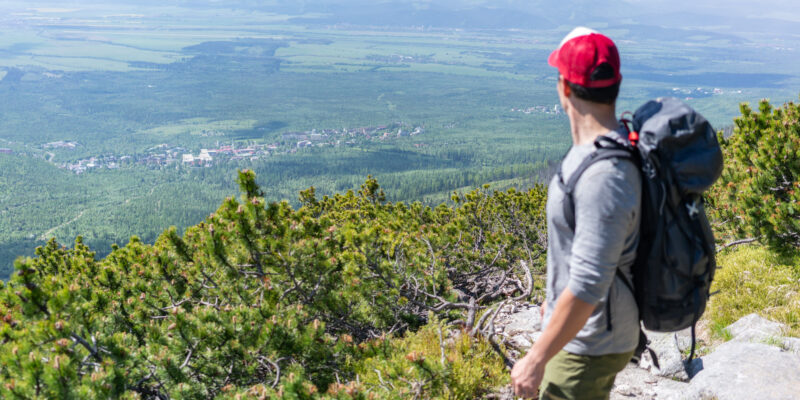 The peak we decided on was Slavkovský štít, the 2,452 m / 8,045 ft fourth highest summit you can reach by a marked trail in the range. It was ideal because we could park our car practically where the trail turned upwards. At the start a gate of trees welcomes you to the wilderness and as soon as you cross it feels like you’re properly in nature. The only thing you need to keep in mind is to stay on the trail because straying can get you into trouble. The Tatras are a small range with massive tourism, so extremely strict rules were set in place to keep this place looking the way it does. Happily, we were soon on the up and looking backwards it appeared as if Slovakia rolled outwards into the horizon.

Notice the striking fact that everywhere around the mountains is practically flat compared to the jagged, sharply rising peaks of this range. 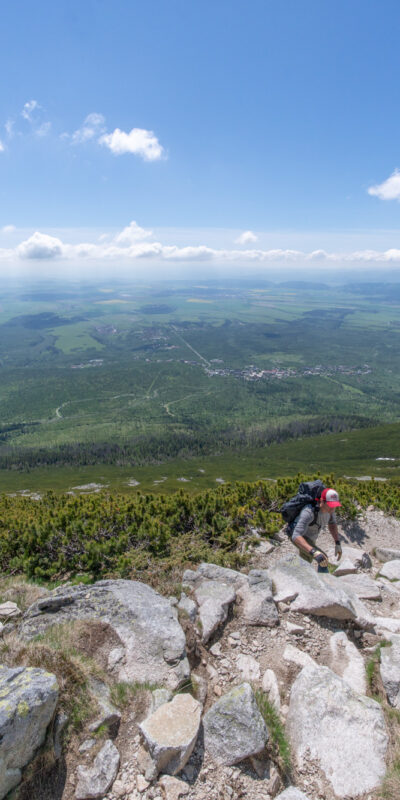 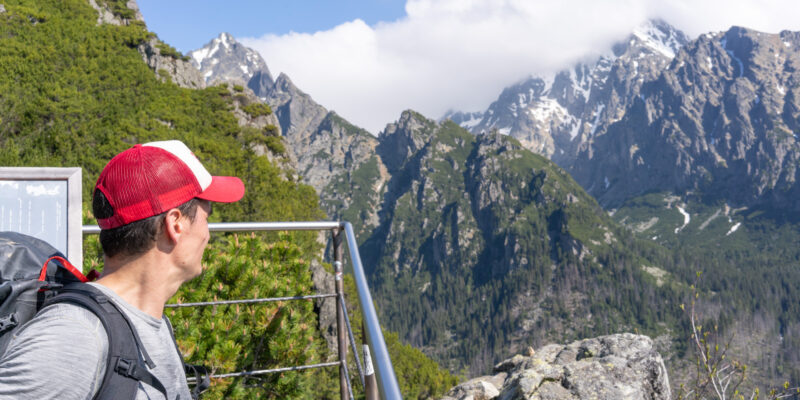 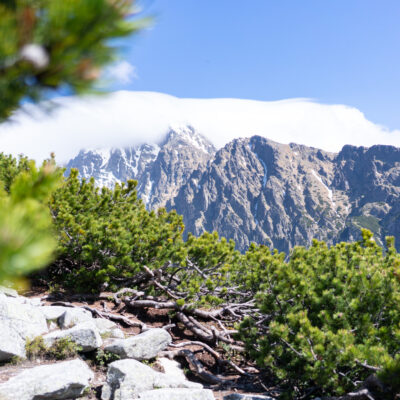 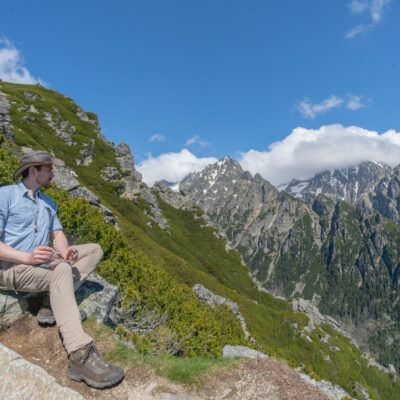 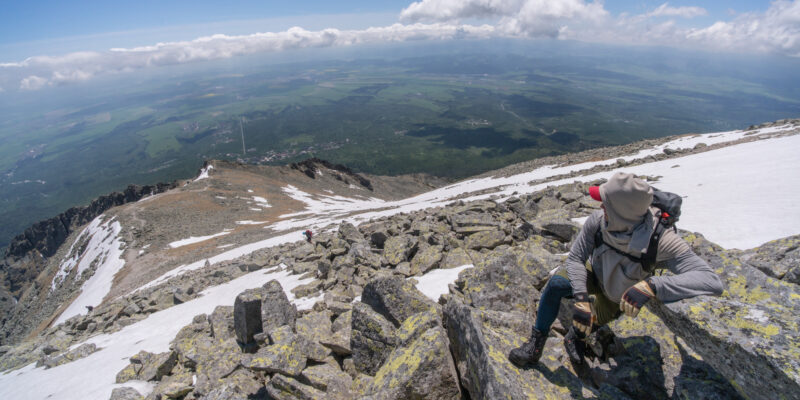 It doesn’t take long for the Tatras to get real. Nearly instantly we were out of the proper forest and into the alpine garden where the path carved its way over large weathered boulders. Then, as if a last goodbye with civilization, a lonely railing marked where the trail became steep and we were soon climbing over colorful lichen covered stone with the refreshing occasional bits of snow. This is where you get hit with the feeling that mere hours before you were on practically flat ground…

This is also where you get the full frontal of this magnificent range. Behind you is a flat world lined with farmer’s fields in a rainbow of colors and peppered with buildings, and in front of you is raw stone reaching for the sky as if a mammoth invisible magnet was lowered just enough to bend space and time and lift the earth towards it. It’s not the summit yet, but this view stays with you for the remainder of your hike. One notable feature of this trail is that, although this place has vicious winds, the path winds its way smartly to avoid completely exposing you and you do not get blasted by the cold powerful winds. 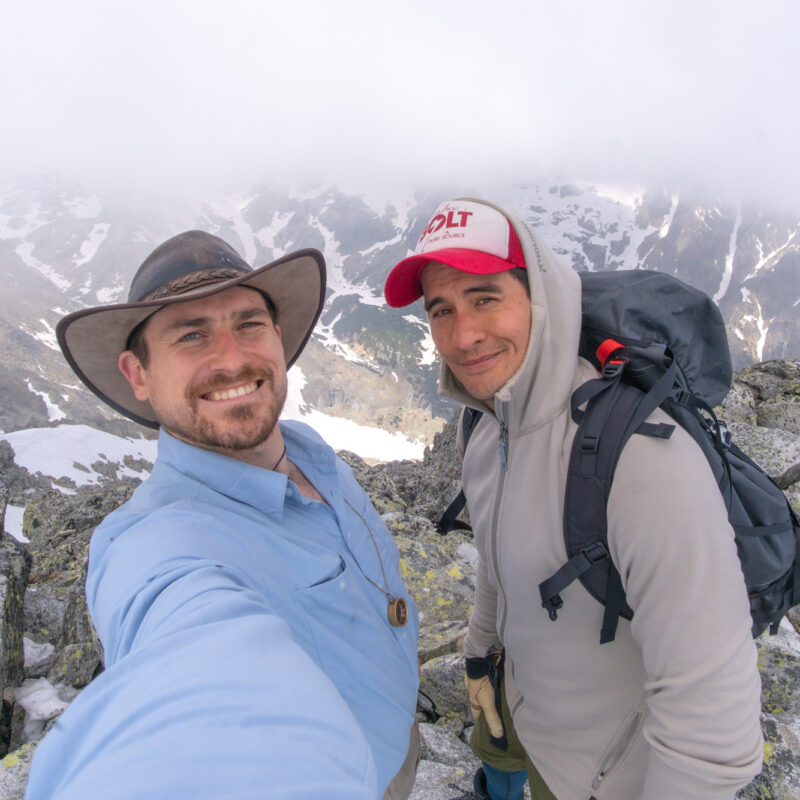 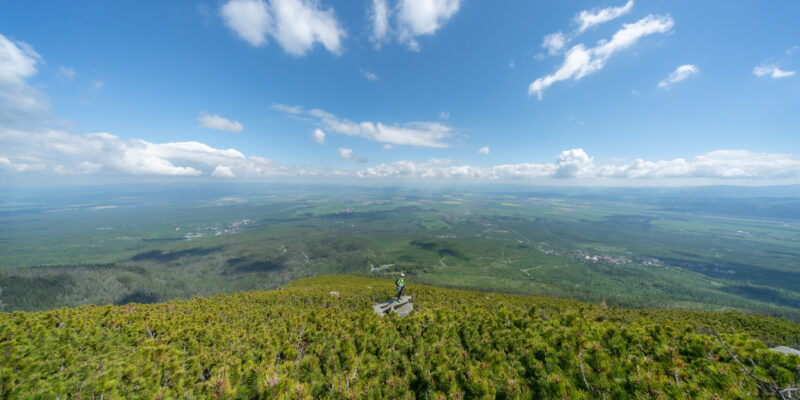 The summit was just a bit further, at this point fully on soft snow you had to kick your steps into, and as we reached it so did the clouds. Taking a well deserved break, we reminisced about the climb and other similar experiences as the sun avoided cover and praised us with its warmth. Soon, though, a crowd approached and threatened our peaceful stillness, so we donned our packs for the descent and a fun last experience with our Hilleberg Tents back near my village.

Glad to show Sven around, and looking forward to him showing me around his parts… check out his Instagram to get a sense of what he’s used to.

Hey! Did you know we’re establishing the FIRST EVER climbing school in Iraq?
Click below to learn more and consider making a donation!