This journal is from my Everest Base Camp trek with The Himalayan Stove Project, learn more and donate to help with our 5th container!

I arrived at Lukla airport one day late. As I would come to learn, unpredictable flight times are fairly standard at what is hailed as “the most dangerous airport in the world” on account of dangerous mountain weather, the volume of tourism, and politics that results in general disorganization with flights. In spite of this, he stood waiting for me with a broad smile across his face. 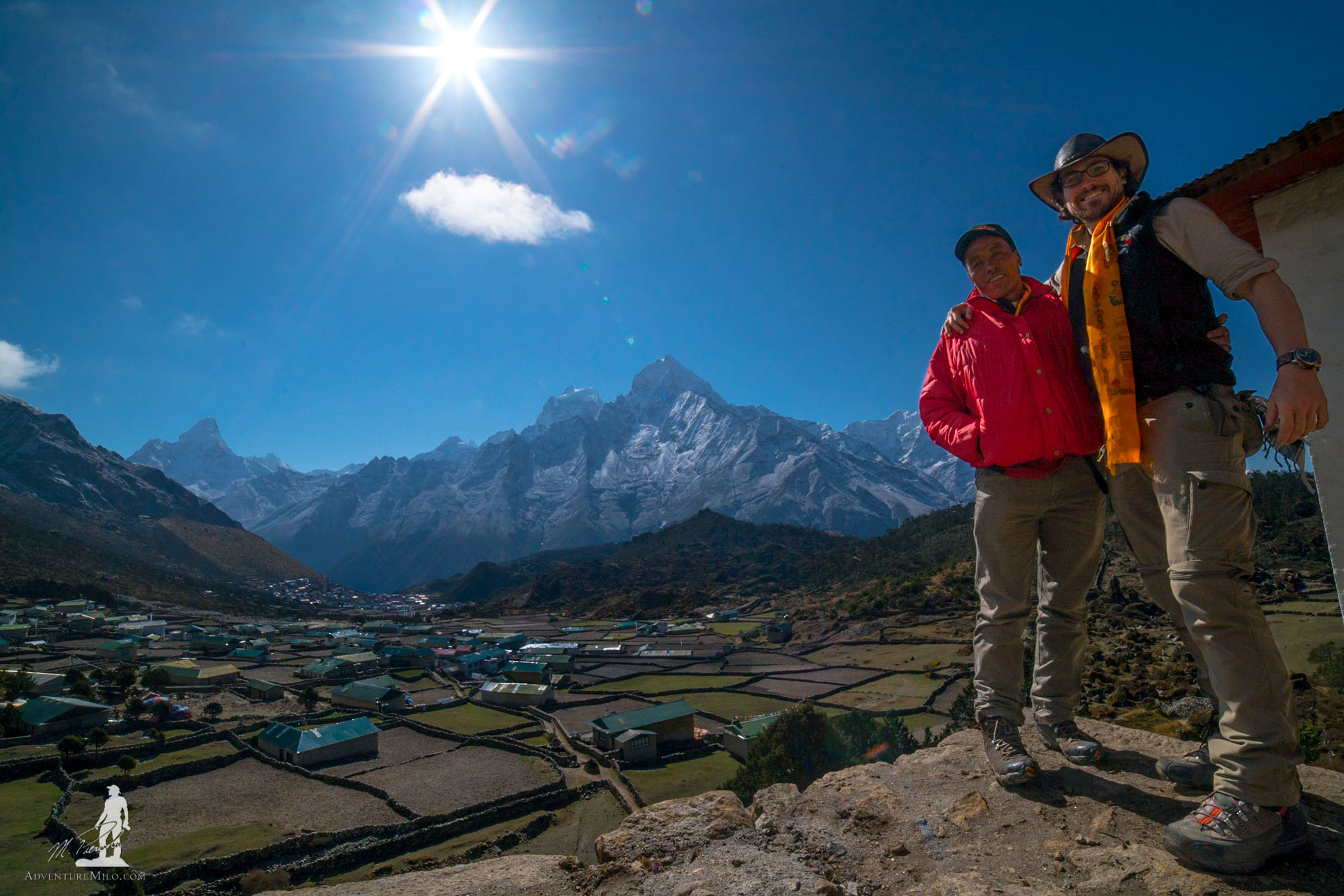 Pasang Temba Sherpa was on the sidelines of the impossibly short airstrip carved into the side of a mountain. He is an unassuming man, about 5’3″ with a barrel chest, broad shoulders, and a dark complexion colored by spending most of his life outdoors. His stature and body are keenly adapted to the inhospitable elevations of the Himalayan Mountain range, evolved over millennia to provide a large lung capacity for the thin air, stocky body to conserve energy, and powerful legs for non-stop climbing.

After months of back and forth emails arranging for this meeting, I greeted him with a surprising hug instead of the traditional handshake and a gift of hiking shoes donated for this trip by Oboz Footwear. He requested for a pair from the US because of the volume of imported counterfeits that rapidly fall apart. I reached out to Oboz because the pair that I reviewed more than a year before was actually the same one I was bringing with me for this trip, and the company was kind enough to support the cause. Right away, he led me to the Alpine Lodge where I was treated to a traditional hot dal bhat meal paired with Nepali tea.

Pasang is the key man in the Khumbu for the Himalayan Stove Project, the one guy responsible for the entire region. Coming from a long line of community builders and humanitarians, he is the grandson to one of the builders of the famous Tengboche Monastery, the largest and most celebrated monastery in the Khumbu Region. For HSP, he hikes to the furthest and most remote villages on his own to monitor, maintain, and deliver the Clean Cook Stoves that save people’s lives. The same trek that challenges tourists in a way that often changes their lives is one that he travels regularly in much the same way as a commute to work. For him, this place that has no roads, no vehicles, no public transportation, or even running water in most places, is home. He knows the challenges of delivering anything to these places personally, and he seems to know every single person we come across, telling me a bit about who they are and where in the Khumbu they are from. 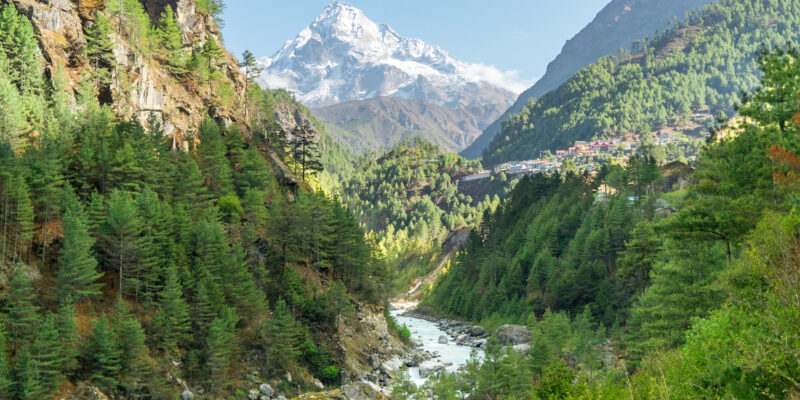 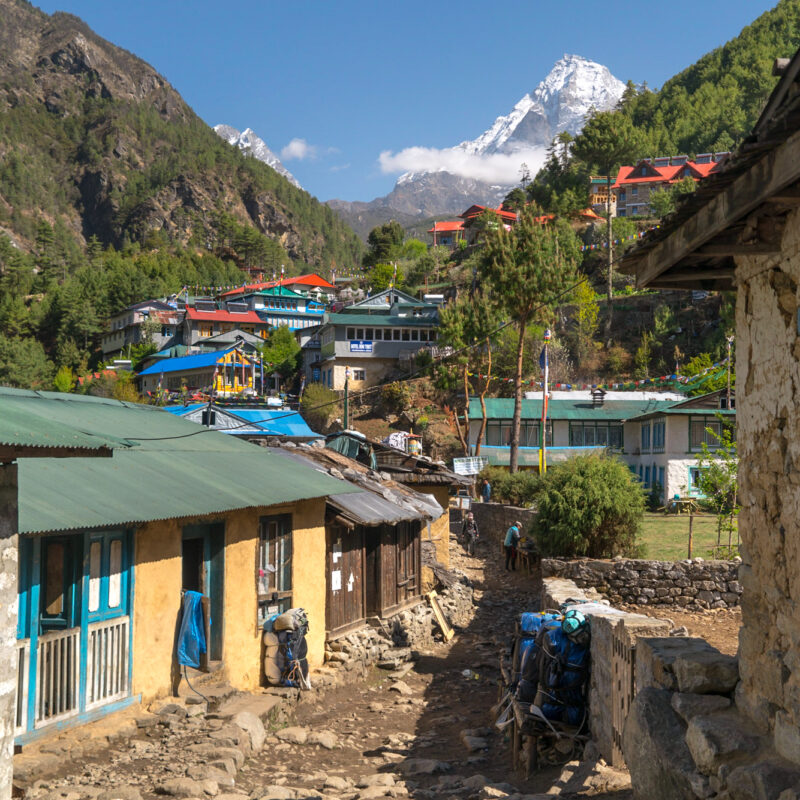 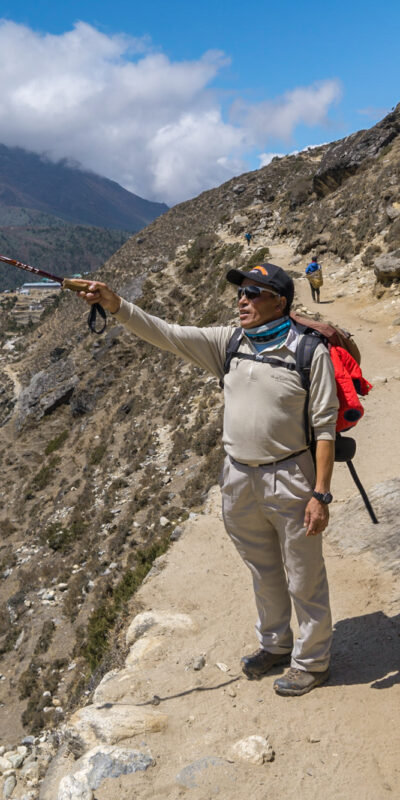 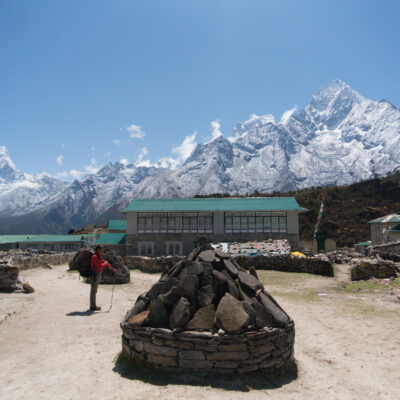 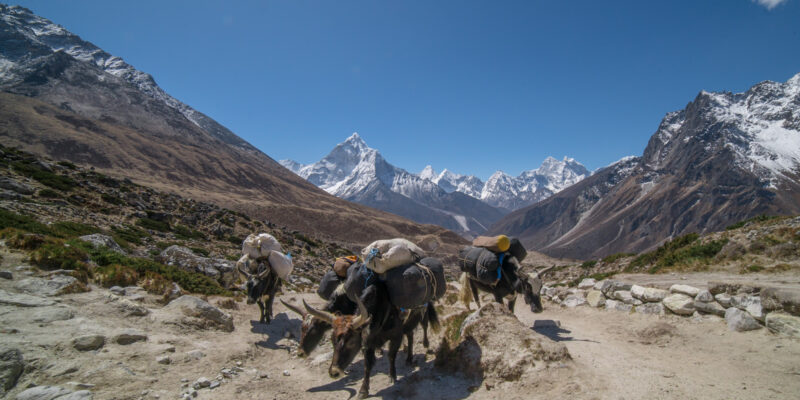 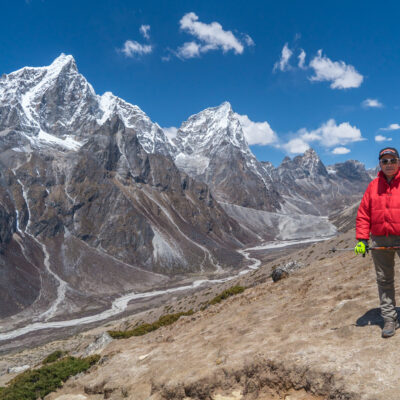 “I could travel from Khumjung to Lukla in three hours when I was young,” he recounted to me about the nearly 6 hour hike… “with a full pack.” Professionally, Pasang has been a Sherpa guide for over 30 years. He started out when he was young, before the region exploded into the tourist capital it has now become. At first he was a porter, then worked his way up to leading expeditions year round in the harshest conditions. He knows the trails, shortcuts, and secrets of the Khumbu Valley as well as anyone could possibly know the region, and continues these treks almost daily. I could not have asked for a better guide and companion on my journey to discover this incredible landscape and learn about the project.

A 360 View at Lukla Airport

Although I had trained for the trip, it rapidly became clear that the elevation took things to a whole other level. The effects of altitude sickness can be felt at 8000 ft (2438 m), and Lukla was already at 9,334 ft (2,845 m). I had climbed fourteeners before, mountains that are 14,000 ft (4,267 m), but the fatigue and other symptoms could be chalked up to the amount of energy spent climbing. In addition, the amount of time that climbing took helped your body slowly adjust, at least a little – and we were coming back down right away. For this trip, the flight that dropped me off took only 40 minutes, so as soon as the plane depressurized I was instantly there for over two weeks straight. Just walking up the steps of the airport, I began to take deeper breaths and felt like I walked a mile by the time we sat down. And it was all uphill from here.

Pasang had seen it thousands of times before, tourists that come firing into this seemingly familiar world and bite off much more than they can chew. His approach is patient, kind, and conservative. Knowing that the simple act of walking uphill is a challenge even for fit individuals, he hired a porter from his village to split my weight. I welcomed this and happily transferred over my tent, sleeping bag, clothes, and some other items. Though this did alleviate the bulk, I still kept heavy stuff on me; cameras, lenses, batteries, and tripod.

He then invited me to sit and ordered another round of Nepali tea. We talked about whether we wanted to spend the rest of the day and night here, or if we could make it to Phakding. This was a village three hours away, a good portion of which was downhill. I noticed what he was doing; putting the breaks on and setting the pace. I understood his caution; he was looking at a young adventurer who was frothing at the teeth, ready to pounce out of the starting gate and run right uphill in sheer excitement. His calm demeanor demonstrated decades of experience introducing people to this unique land and he conveyed a sense of safety and comfort. 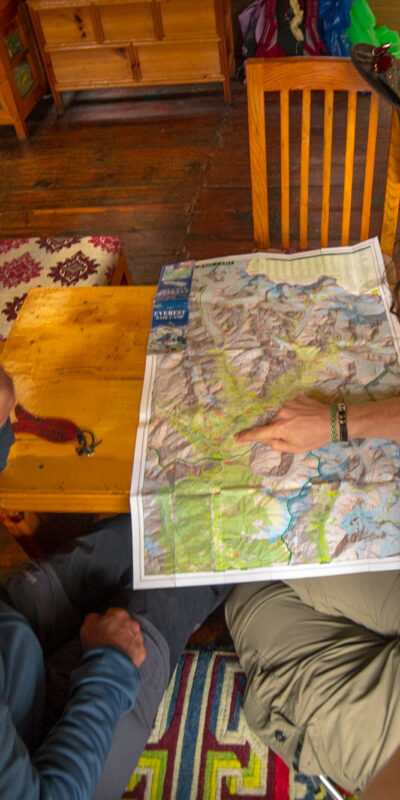 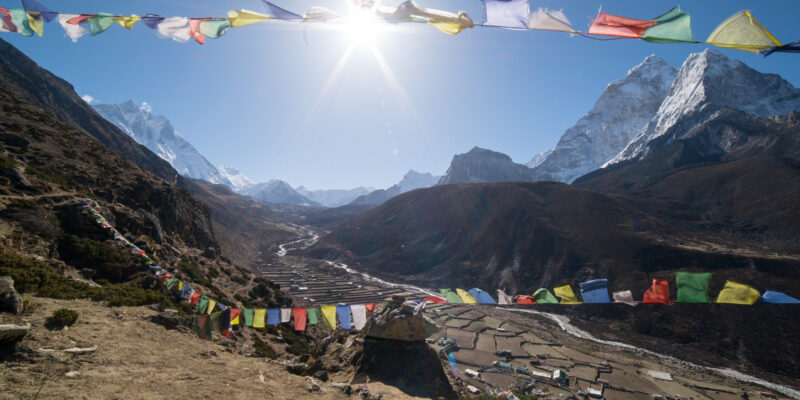 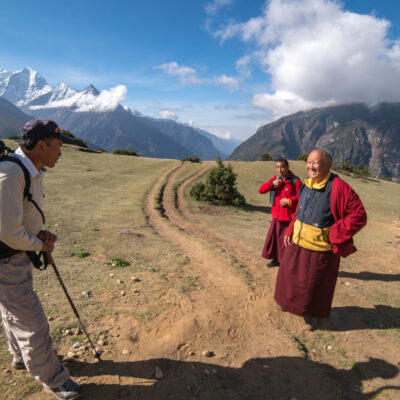 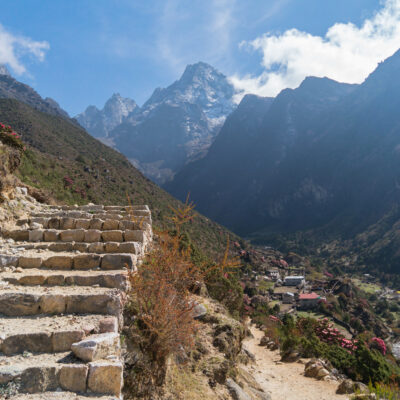 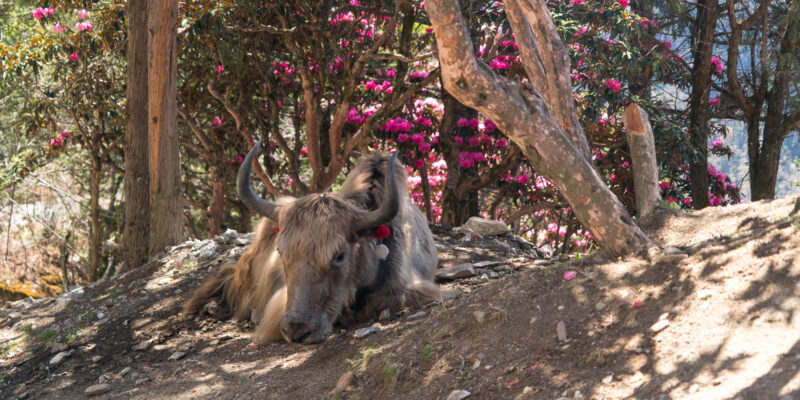 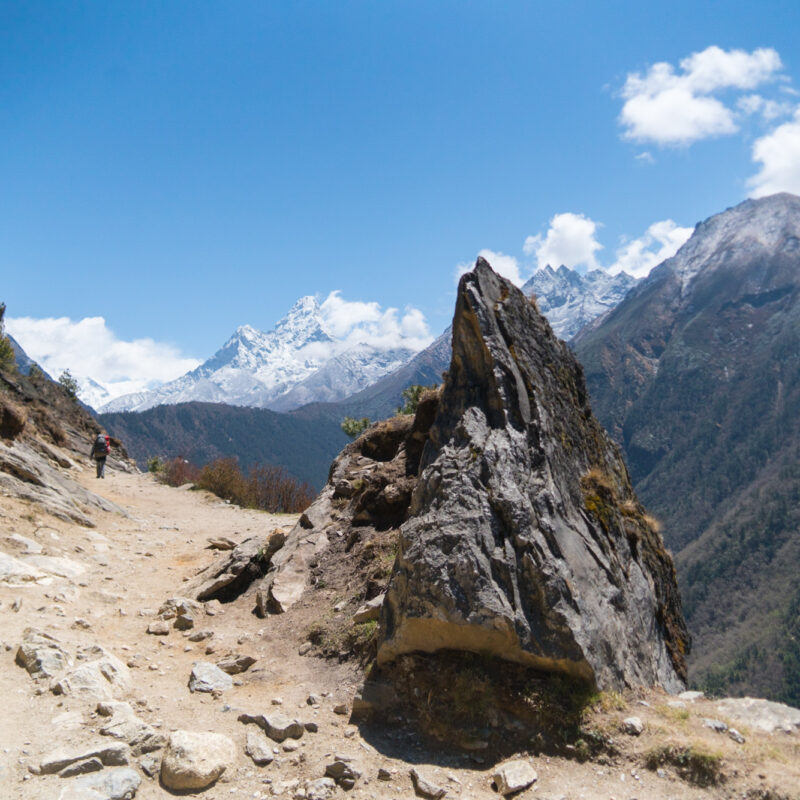 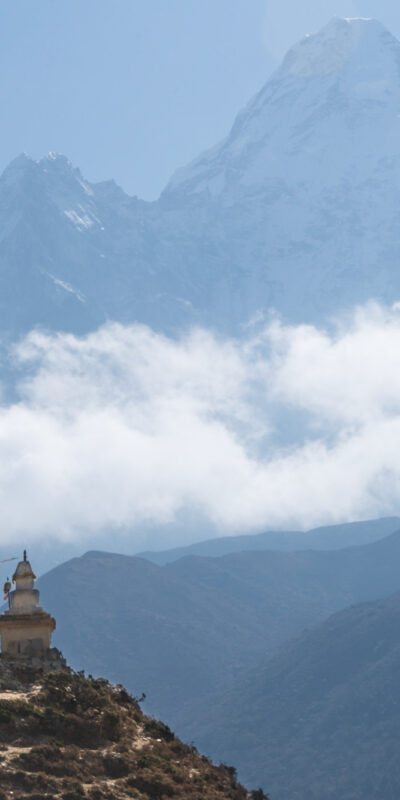 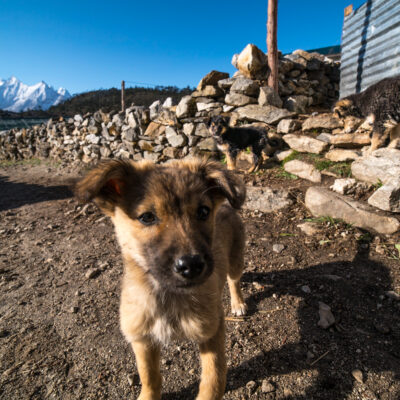 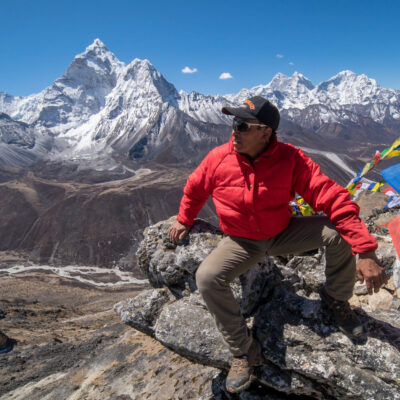 Trekking with Pasang was different, it felt like he embodied the spirit of the Khumbu. He took light, deliberate steps and was always aware of me. Though he could be 100 meters away, he could teleport by my side within a moment. Whenever we stopped, if he sensed that I was listening, he would point out an intimate detail that would otherwise go completely unnoticed by even the most observant individuals. Upon discovering that I love honey, he once gestured across the entire valley to a distant cliff. Invisible to the naked eye, he pointed out mountain bees that had built hives out of range of any animal or man. I could point to any distant homestead, and he could tell me who lived there and something about them. Everyone we met was warm to him and so thankful, and he seemed to have met all the heroes that visited this place and brought it’s treasures to the rest of the world. His endless energy was accompanied by a deep sense of pride and compassion for the residents of this incredible place.

To trek with him was an honor and I am deeply grateful to now call him a friend. I genuinely feel that I have developed a deep connection to this place and its rich history. And I am grateful to George Basch and the Himalayan Stove Project, his incredible contribution to the people of Nepal goes beyond anything I have ever witnessed and is so necessary in the wake of the 2015 earthquake and the toll that tourism and politics took on such a delicate environment. There is a magic to this land that becomes part of you when you visit, it is not something that you can describe, but is always present with you after you leave.

This is the first in a series of stories from this trek and the Himalayan Stove Project.
Subscribe to receive a notification for the next installment, and please consider donating to help us deliver the 5th container of Clean Cook Stoves to Nepal.