These words echoed in my head as I floated towards a white textured wall infinite in every direction. I was weightless and could sense a gentle blue aura that pierced the crystal clarity of the world around me. With the brightest light known to man illuminating what I saw, for a moment it felt as if I was experiencing infinity. Then, my breath gave out and I turned to surface.

When I breached, my eyes scouted the empty horizon around me until I could see a mast rise from behind a cresting wave. The yacht was turning in a figure eight motion to pluck me out of the water and the captain had a big smile on his face. Once on deck, I could make out with my limited Spanish that he was eager to hear my impression; not too many people ask to jump off ship in the middle of the ocean. Fewer even ask to be left floating alone. Once on board, we resumed our steadfast pace from Ihlia Mujeres, the Island of Women, to the mainland. My destination was deep in the jungle. 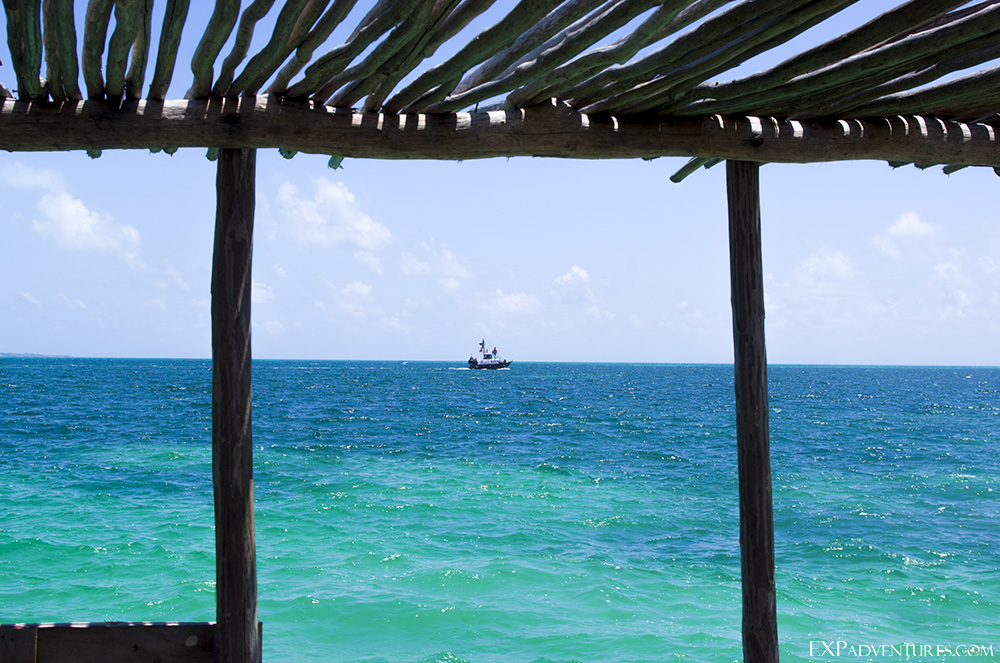 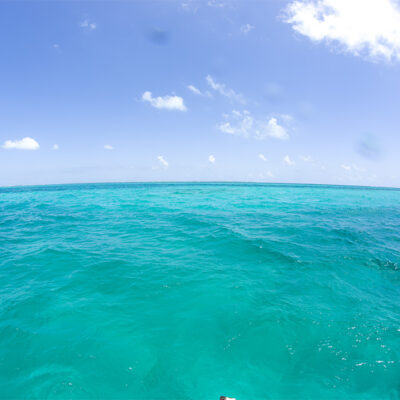 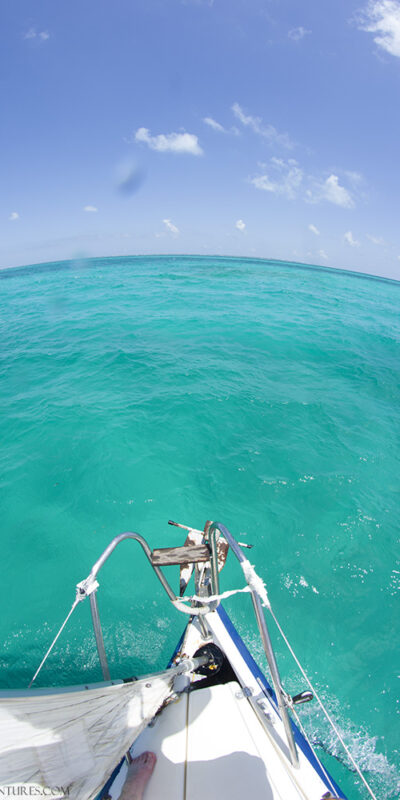 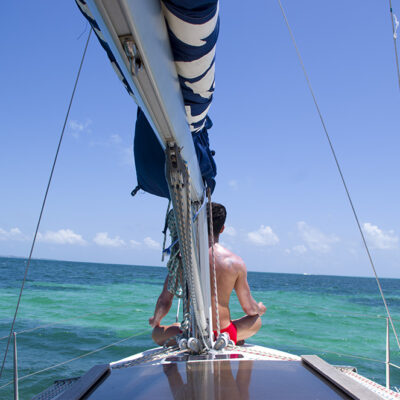 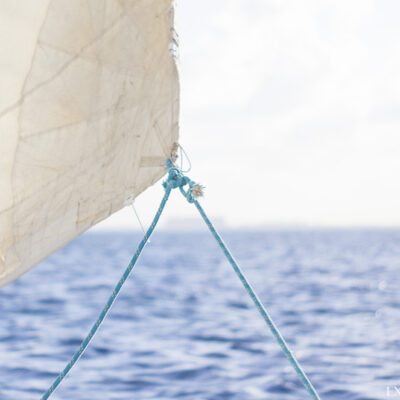 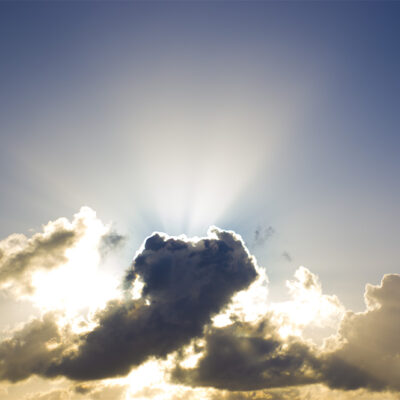 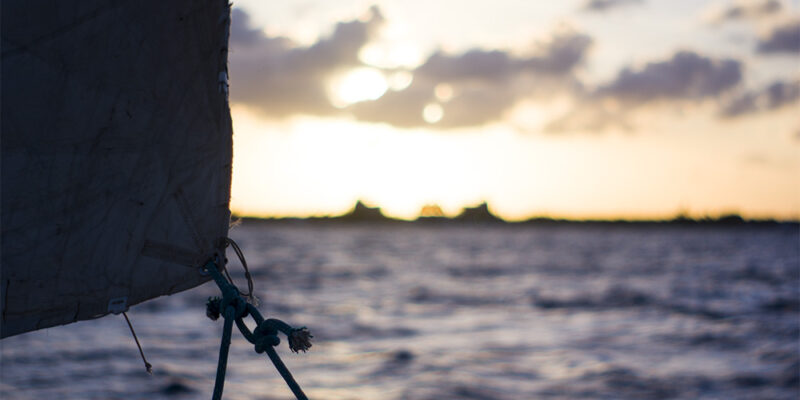 I had come to Mexico in search of adventure and I found it deep underneath the ground in sacred cenotes water caves. Here, hundreds of millions of years of ice ages filled and drained the Yucatan Peninsula, dissolving its layers of Karst Limestone. What remains is an unknown and unimaginable network of underground labyrinths, some discovered to be larger than cities; frozen in time and darkness. I had the privilege of a very unique look at one such place.

The call came 8pm the night before,

“Hi Milo, we can go tomorrow. I will take you deep to my favorite places where no one goes.”

The world I was about to enter was like from another planet. We started in a chamber that appeared a dead end and my guide bent down in a corner and slipped into a shadow. The first obstacle was a motorcycle sized stalactite that swung from a root of a surface tree. I did not think about how many more times it would sway before it guillotined shut the basketball sized opening I was now crawling through, forever.

From total darkness, the cave now revealed itself like a dragon spreading its wings. Both my headlamp and the guide’s swung out of the hole I emerged from and into seemingly space. The walls disappeared into this void and out of it came a deafening wave of the absence of sound or echo. We paced forward on what appeared a moving walkway of dirt rotating under our feet until I saw a bright flash on the ground in front of me; water. And then, we entered it. 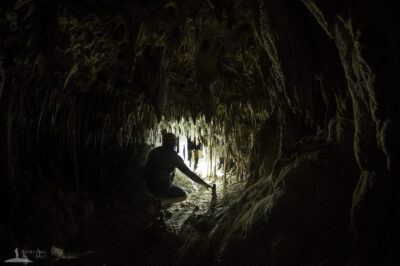 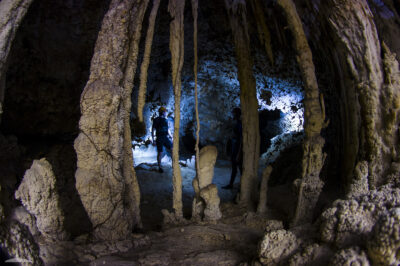 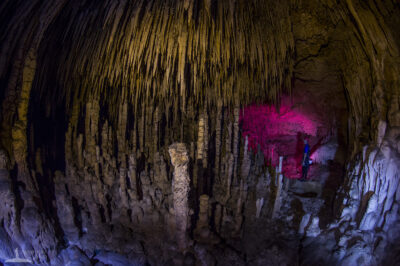 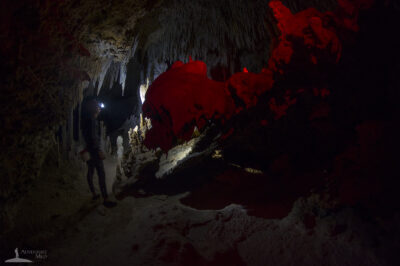 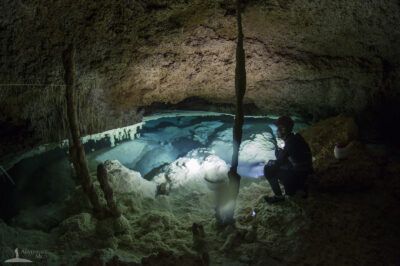 Suddenly, as if absorbing the light from our lamps, this black mirror surface uniformly burst luminescent blue. Light bounced off the pale colorless rock, off the underside of the surface, and again, reaching every crevice and shining all at once as if some massive computer had come online. Above and on the sharp spires that hung off the ceiling, the light danced as it refracted through the waves we made as we waded through the lukewarm water. It was a truly spectacular light show and welcome to this magical place. What I experienced after is told through the photos I was privileged to capture. 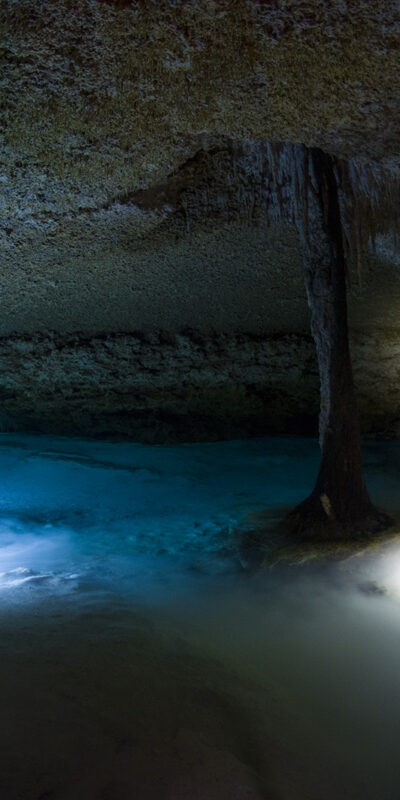 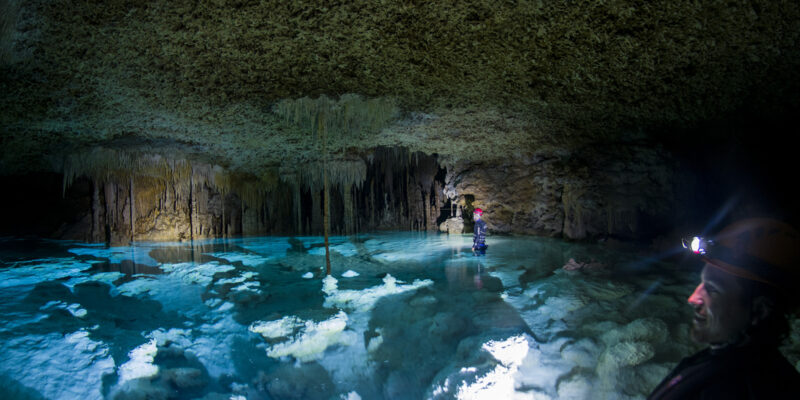 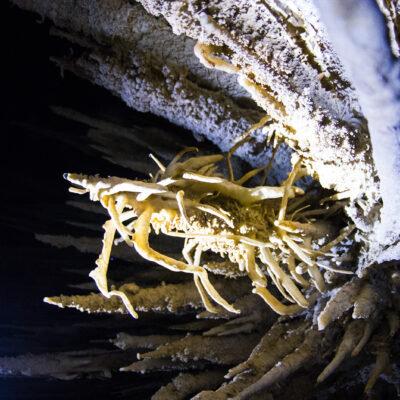 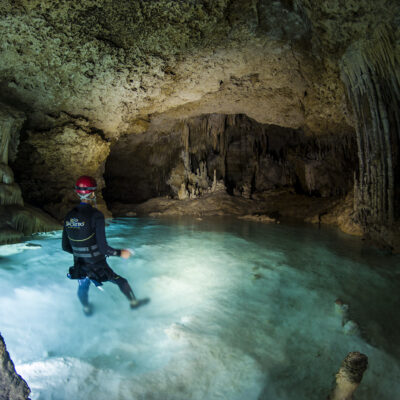 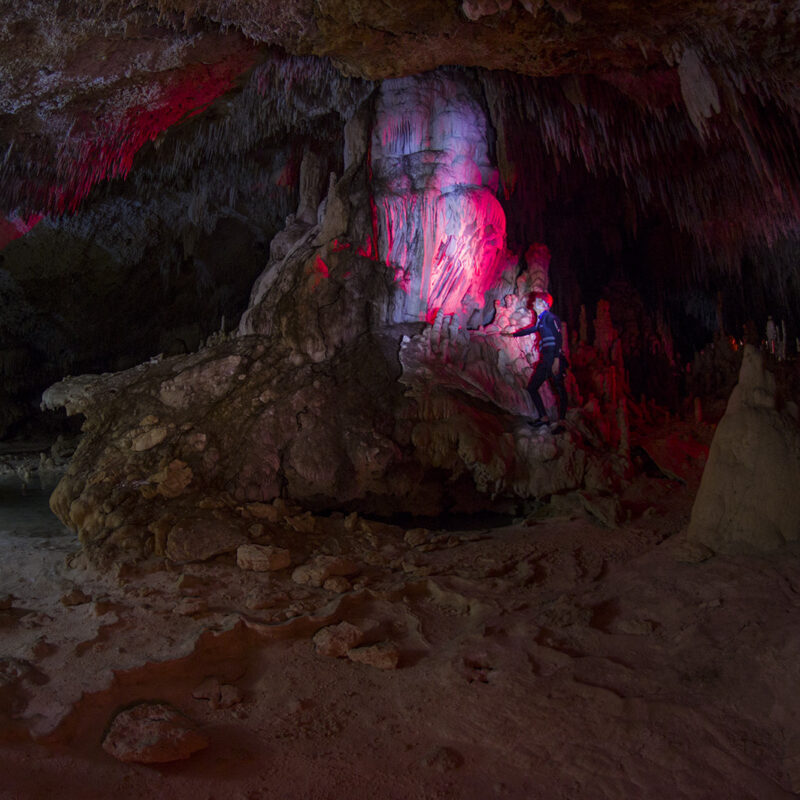 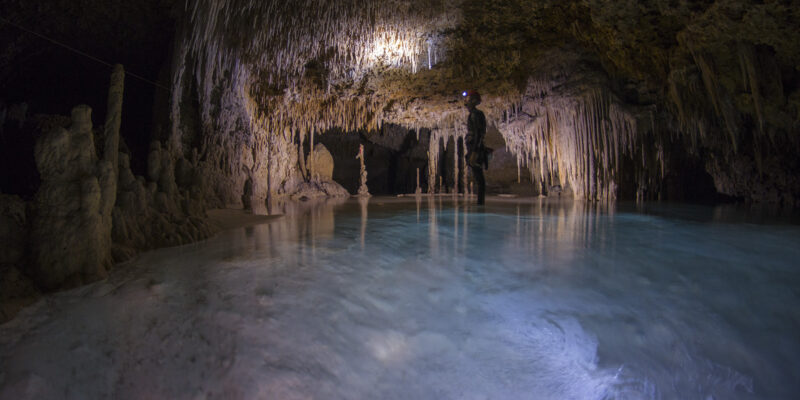 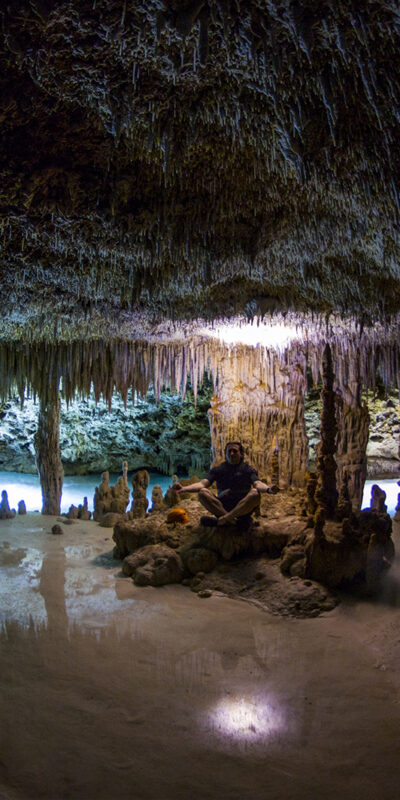 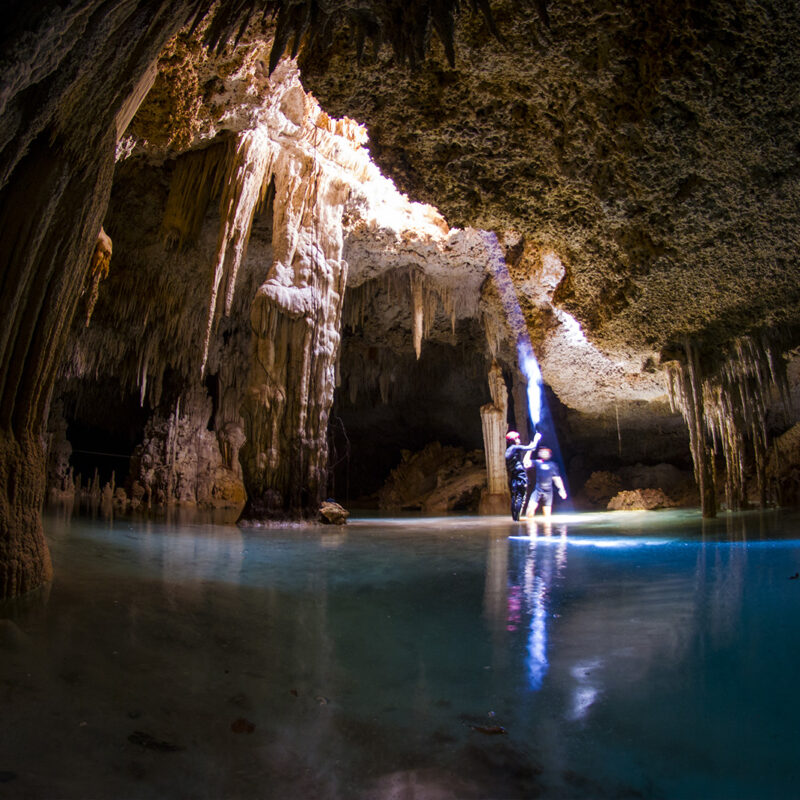 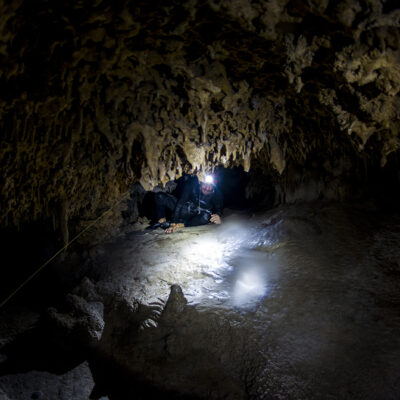 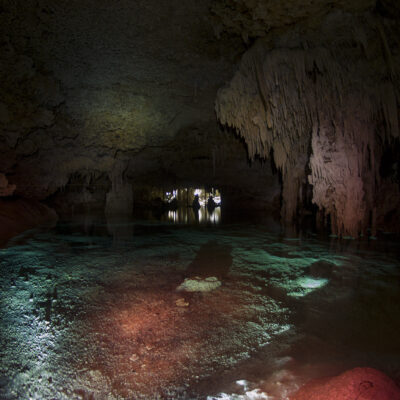